Following on from yesterday's post about the Rough Luxe 'movement', I feel I need to clarify a few things. Firstly, I'm not advocating Rough Luxe as such, mainly because of the hefty pricetag that accompanies it. In other words, the 'luxe' side interests me less than the 'rough' aspect. What I am in favour of is the aesthetic which underpins it.

While on holiday two months ago, I first heard the term and began writing my own list of what represents to me, for want of a better term, 'rough elegance'. This is what I came up with: 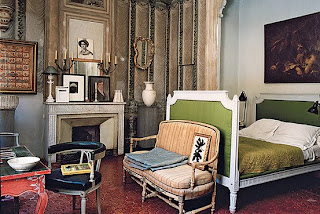 Photograph by Francois Halard
My version of 'rough' does not cost a lot of money. Its 'richness' is in the experience, as in the care taken, the hand-made quality. It's about travelling around the Mediterranean - in a freighter. It's visiting Tiffany's - but, like Holly Golightly, having my own version of the experience, even if I buy nothing. It's the cheap pensione in Florence in 'Room with a View' rather than the grand English country house. 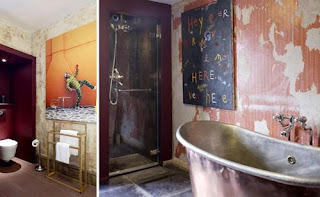 It's not about trying to re-create a 'romantic' look with cabbage roses. For me it's not about chintz or lace. I think other periods like the 40s, 50s and 60s can also evoke a faded elegance that is not restricted to the Victorian era. 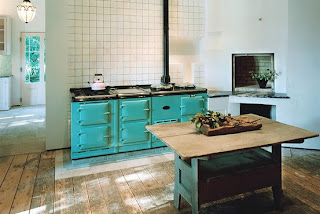 Photograph by Bill Jacobson
Sometimes I think that hoteliers, shopkeepers and designers see imperfection and faded glory as a way to charge customers more for the experience. The aesthetic I'm advocating is one that 'tells a story', but not one you have to pay an exhorbitant amount to access.
I realise that the rooms in these photographs are very expensive. Agas and copper baths don't come cheap. But I believe it's possible to access this aesthetic without the feeling of exclusivity or the price-tag.
Photographs courtesy of the Wall Street Journal and Design Milk.
Posted by beth at 5:45 PM 6 comments: 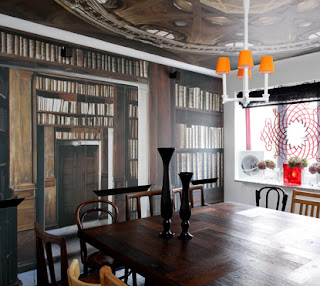 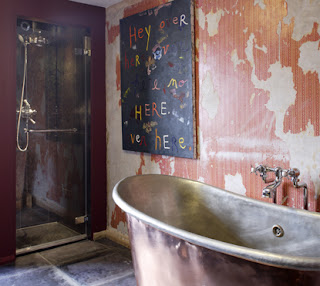 Images from Rough Luxe website
﻿
Over the past month, two articles have interested me greatly. The first was published in the Wall Strret Journal on September 9 and it defines the so-called 'rough luxe' movement as 'a study in Contradictions, an attempt to reconcile the antique or the just plain old with the contemporary, the accumulated with the newly acquired, the decrepit with the pristine. It’s artful dissonance'.

It cites several examples and practitioners of this new movement, one being 'Bill Sofield, best known in the ’90s for his sleek overhaul of the Gucci boutiques' who gives an example of rough luxe as follows: 'In one room, in a wealthy artist’s house, a quilt-covered daybed is nestled in a corner, where a wall, covered in pristine ivy-patterned wallpaper, meets another, its paint job splotched and faded'. Other fans are 'François Halard, a photographer specializing in interiors, whose own homes in America and France qualify as prime examples of rough luxe', and 'Murray Moss, co-founder of Manhattan’s store Moss—itself a showcase of high-priced, cutting-edge design items in an interior stripped to its original materials and structure'. Both designers are are quoted as using the term '“autobiographical” to describe the kind of home they admire—“a reflection of the soul,” Halard says, “not what the owner can afford.”'

The article goes on to cite several past examples of rough luxe, such as: 'the apartment where Cy Twombly and his wife live in Rome, first photographed for Vogue in 1966; Maxwell’s Plum, the New York restaurant outfitted with the trappings of defunct saloons; ’70s exposed brick; the colonization of Soho and Tribeca, with manufacturing spaces mildly renovated for residential use; white wallpaper introduced by Gijs Bakker in the early ’90s, with holes in the panels to allow what’s underneath to show through'.

Further, 'A new wave of young people in their twenties is championing rough luxe as a rejection of the minimalism that dominated the world they grew up in—a style that began as industrial and makeshift and gradually progressed to extravagant and precious, with multiple coats of polish on a cement floor and living rooms indistinguishable from hotel lobbies. Rough luxe sounds the death knell for that perfectionism. If rough luxe has a mantra, it’s “authenticity.”' Caroline Till, the design trends editor at London’s The Future Laboratory, says the brand strategy firm was tracking a trend among designers that by spring was spreading into the broader marketplace. Their April 2009 trend report, called “Inspire: Rough Luxe,” stated, it “celebrates a heavy rawness erring on the artisanal.” Till doesn’t believe the timing is coincidental: “Because of the downturn, consumers are taking a bit longer to think about a purchase,” she says. “And they want to buy into a story.” An example of the movement personified is the Rough Luxe Hotel in London.

The article concludes: 'Rough luxe may not have been occasioned by the current economic recession—the movement was on a roll before November 2008CHK—but it does seem to resonate with it. “I think especially now, when we don’t have a sense that we control our fates entirely, maybe there’s something a little bit easier about the idea that every single surface of your environment isn’t polished,” Sofield says. “There’s a friendliness to it, maybe an egolessness—just letting certain things be".'

The other article was posted on design-milk.com on the 24th September and states that 'Many may refer to this stuff as "junk", but the beauty lies within the details, craftmanship, and history of these amazing pieces'. Is it the new 'shabby chic?' or something altogether different? Whatever the case, it seems as if rough luxe may be here to stay for a while. Which is good, because to me it represents elegance, comfort and thrift in a world where these qualities are becoming increasingly rare.

We've just returned home from a weeekend in Nelson Bay, where you could easily feel that you've magically been transported to the other side of the world to a Greek island. We stayed in the centre of town at the fantastic Oaks Lure. If you're so inclined you can cook up a storm in the spacious modern kitchen: 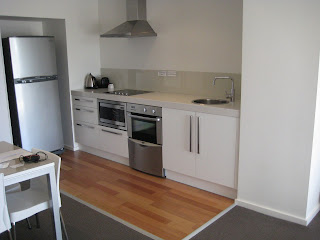 We were too busy being out and about to use it very much. We climbed Tomaree and looked down on what could be mistaken for an Aegean harbour: 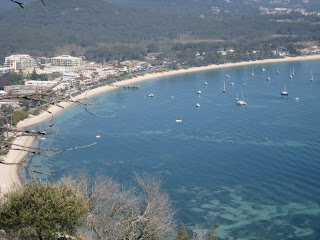 We also did some boating: 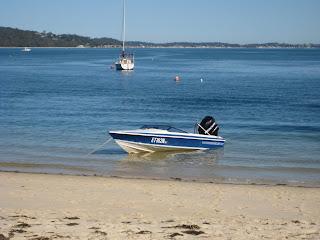 And of course, eating. We ate oysters and calamari down by the marina: 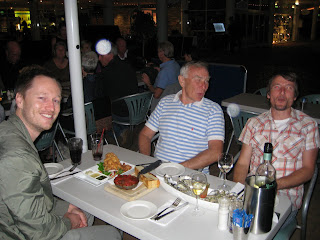 We were also lucky enough to be invited by our Greek friends to a beautiful feast at their home. The food was fantastic, with lamb, steaks, rice, salads and garlic bread: 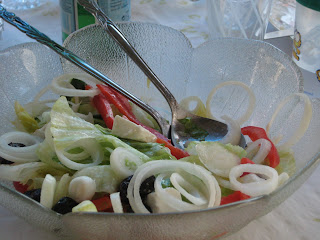 And no Greek party is complete without dancing: 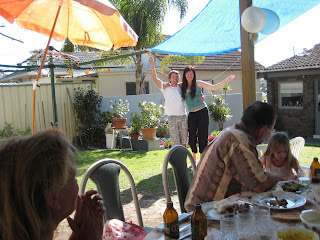 Thank you Tass, Bob, Katherine and Chris for sharing your Greek paradise with us!
Posted by beth at 5:42 PM 5 comments:

When we were renovating a city apartment, we decided to adopt a policy of 'rough chic' which fitted in with our meagre budget. While walking around the local streets we managed to find a few items on the footpath which came in very handy after we painted them, such as this side table: This shelf looked very rough in its natural state, but is quite sturdy and holds a lot: 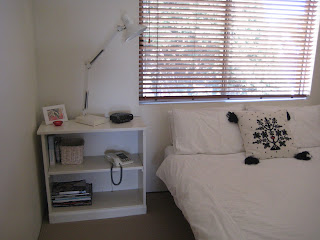 This cabinet was originally an unattractive shade of bottle green: 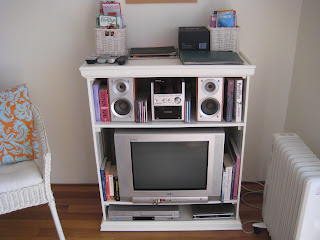 With the addition of some home-made cushion covers in Amy Butler fabric, the apartment looks quite bright and modern: 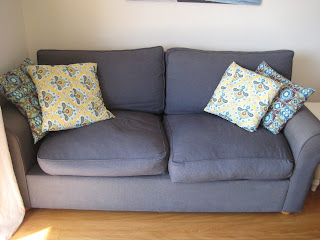 I'm still in cushion mode and these are my most recent efforts. They are not for the boatshed but for an 1890s house. Because the house is Victorian, I decided to use up a Laura Ashley remnant for the side cushions. However, to bring the look into the twenty-first century, I trimmed them with Amy Butler remnants. Amy's William Morris-esque designs went perfectly with Laura's sprigs and hopefully offset any potential tweeness: 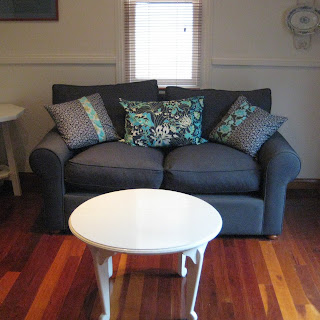 In the dining room, I used some Amy Butler fabric from the Midwest Modern II collection to brighten up this 80s chair: 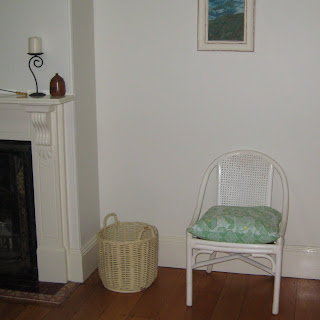 The chair on the right (below) also has a cushion out of this fabric. You can see from this little grouping that I don't mind mixing my eras. The T. H. Brown dining chair on the left is very mid-century, but hopefully still looks OK with the earlier chair and dresser: 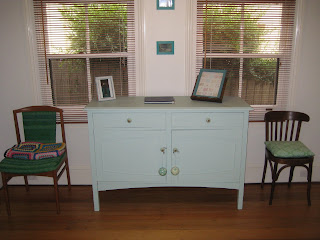 All the furniture in the bottom three images was found in op shops.
Posted by beth at 9:10 PM 3 comments: