These images will no doubt surprise anyone who has looked at my blog over the last three years, due to the fact that the boatshed has a predominantly white colour scheme with a few pops of colour in pink and green. However, as has been evident in my recent posts, I've widened my horizons and started considering black timberwork and natural surfaces. I believe that these are compatible with white walls, and lend a bit of drama to a space that could otherwise be a bit bland. So, this week I've been a little adventurous in considering options I would perhaps not have previously considered. For instance, painting these once green-toned chairs black: 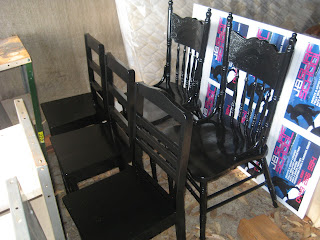 And getting excited about this old metal shelving: 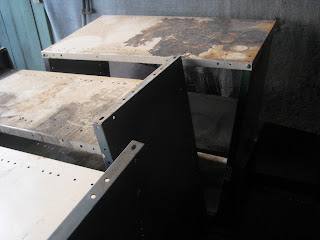 The piece de resistance is this table that I found at the opshop yesterday. I thought that the best thing about it was that it only cost $5. Until I turned it over and saw that it was manufactured by Parker, an iconic Australian manufacturer whose furniture I love: 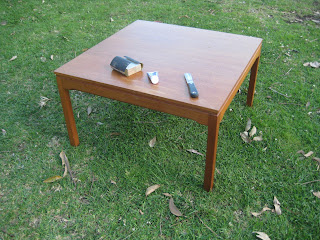 It does have a tiny gouge, but nothing that a bit of filler wouldn't fix: 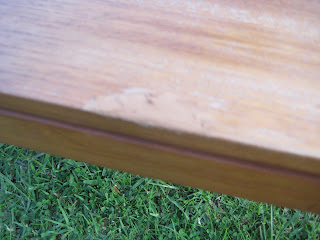 It seemed sacrilegious to paint it white (or black), so purists will be happy. It stays as it is.
Posted by beth at 10:54 PM 2 comments:

Thanks for the Mention

Thank you so much to Little Dream Girl for mentioning my blog x
Posted by beth at 10:22 PM No comments:

One of my favourite places in the world is Byron Bay. Pretty soon we'll be taking a little trip there, and will be staying at Atlantic Guesthouses. The rooms look like they'll be light and airy: 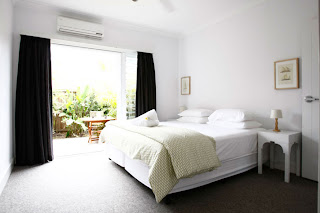 I love the black curtains and these cushions: 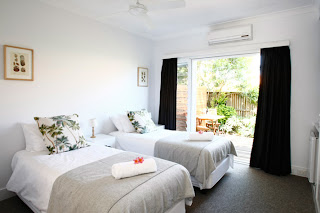 And the pink chair has a great retro feel: 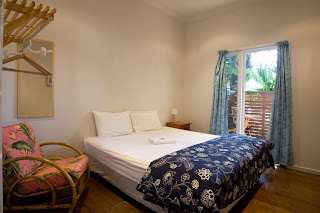 Finally my book has arrived and it is just as good as I had hoped. ﻿"Dark Nostalgia"by Eva Hagberg is all about interiors which have been informed by a sense of a past that never existed, if that makes sense. But while I love the images, what does it for me is the language she uses to describe both the aesthetic itself and her feelings toward these rooms. Here's an example:
"The layering of history that we see in these spaces, the weight with which so many of them have been considered and designed, immediately reassures us that our today-even once we've left the cocooned surroundings of dark wood and detailed chandeliers and stuffed eagles and weighty whale bones- is going to be better than all right...The collection of knotty planks and rococo mirrors and reclaimed lights and ancient fan belts have all come together to paint a picture of a time that never was, but still a time that I can remember wanting". That's poetry to my ears.
One of the interiors featured is that of Freeman's Hotel in Manhattan: 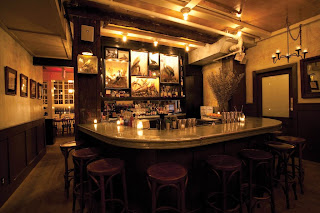 And the Manhattan loft of Robyn Standefer and Stephen Alesch. As a former teacher I love the chalkboard. And I wouldn't mind the map drawer either:
﻿ 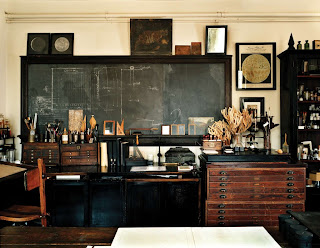 Images from The Faster Times website
My favourite restaurant in the book is Public which was, as Hagberg so eloquently puts it, "one of the first New York restaurants to play with an aesthetic of reinterpreted nostalgia, and it became a touchstone for historically informed readaptive reuse-the pleasure of the reclaimed barn door, the brightly dropped filament bulb. . . .The designers looked to ideas of collective memory as articulated through a public library and the thrill of discovery inherent in its card catalogs . . . The detail expressed in Public, in the consistency of design from the typewriter typography of the menus to the obviously government-issue doors, the hanging mailbox keys with their rubber-stamp labels, and the books with their Dewey decimal-inspired classifications lining the coat check space, creates an unexpected but familiar sense of honesty.﻿" Image from Public website
As a former librarian, I'm in love with the whole card catalogue and Dewey decimal-labelled books aesthetic. Here's my own little card catalogue looking a little lost amidst the coloured cushions:
﻿ 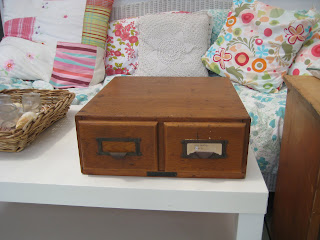