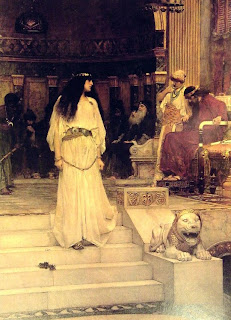 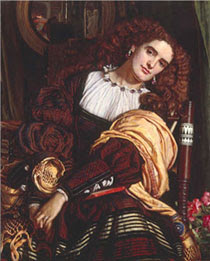 I can't wait to see the exhibition that's coming to the Art Gallery of NSW, Sydney, from 20th May to 29th August 2010. It's called 'Victorian Visions: Nineteenth-century art from the John Schaeffer Collection', and contains 45 paintings, watercolours and drawings by Pre-Raphaelites and other nineteenth century artists such as Rossetti, Holman Hunt, Burne-Jones, Leighton, Poynter, Watts and Waterhouse. Among the artworks are 'Mariamne' by J W Waterhouse; Holman Hunt’s 'Il dolce far niente'; Richard Redgrave’s 'The sempstress'; and Leighton’s 'Athlete struggling with a python'.

Earth Hour at the Boatshed

Last night, we turned off all our lights at the boatshed between 8.30 and 9.30 for Earth Hour 2010. So we wouldn't be in total darkness, we got ready by stringing up some fairy lights powered by a battery: 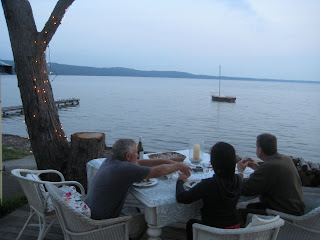 And lit some candles: 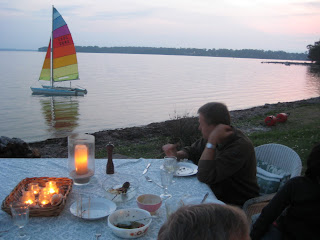 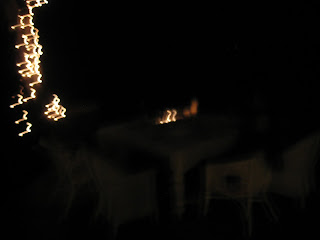 Then it was all over: 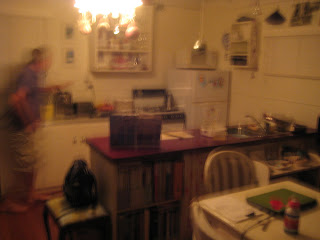 Here is some information on Earth Hour, care of the Bigpond News site:

Sydney's Opera House and Harbour Bridge fell into darkness on Saturday night as millions of lights were switched off across the city, kicking off a global energy-saving marathon. A swathe of homes and businesses also killed the lights at 8.30pm (AEDT) for 'Earth Hour' in an effort to lower the planet's carbon footprint and raise awareness of the environment.

Harbour ferry horns blared to signal the rolling event, which began in New Zealand, Fiji and Australia, and will wrap up 25 hours later in Apia, Samoa, at 6.30pm (AEDT) on Sunday. Supporters clasping candles gathered at city viewpoints to watch the spectacle and photograph Sydney's CBD before and after.

Earth Hour is supported by 4,000 cities in a record 125 countries and includes 1,200 famous landmarks. Egypt's Pyramids and Sphinx, the Trevi Fountain and Tower of Pisa in Italy will also take part, led by a five-minute blackout of the Eiffel Tower. For the first time this year, the Forbidden city in Beijing will also be taking part, along with 20 cities across China, despite the country's resistance at Copenhagen.

Now run by the WWF, Earth Hour began in Sydney in 2007 when 2.2 million people switched off the lights in their homes, offices and businesses for 60 minutes to make a point about electricity consumption and carbon pollution. The campaign went global the following year, and it has now harnessed support from a raft of multinational companies including Google, Coca-Cola, Hilton, McDonalds, Canon, HSBC and IKEA.

If, like me, you love romantic sumptuous furnishings, beautiful paintings and gorgeous actors and actresses, you would love the BBC 2 production, "Desperate Romantics". The last two episodes will be screened on the ABC (Australia) this Sunday 20th March. The interiors of Pre-Raphaelite painter Dante Gabriel Rossetti's studio could be loosely described as rough luxe meets bohemia. Unfortunately, I was unable to find very many images of the interiors on the web, but these stills from the series may whet your appetite. This is Rossetti and his model, Lizzie Siddall: 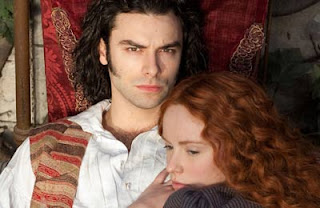 The members of the the Pre-Raphaelite Brotherhood - John Everett Millais, Rossetti and William Holman Hunt. Second from the left is a fictional character, Fred: 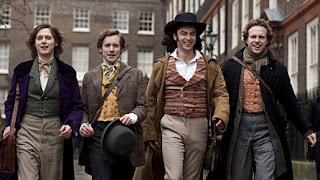 The series is set in 1851 and explores the lives and loves of the artists: 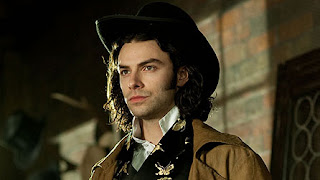 Hunt and Rossetti in the studio with model Annie Miller: 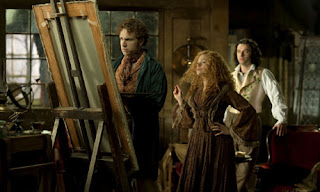 The artists in a tavern: 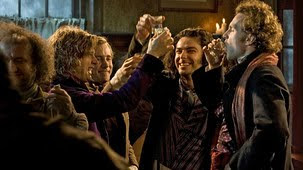 The actresses resemble the women used as models by the Brotherhood, with their long, thick, wavy red hair: 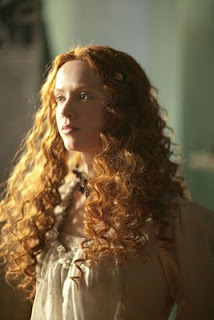 One of the most interesting aspects for me is the depiction of the artists recreating some of their best-known paintings. In this case, Millais is painting "Ophelia": 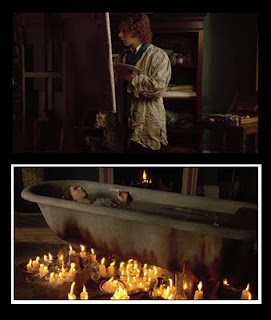 With Lizzie as his model: 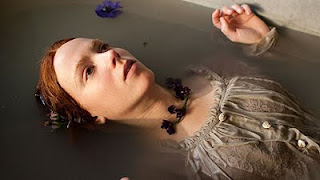 Here is the real thing: 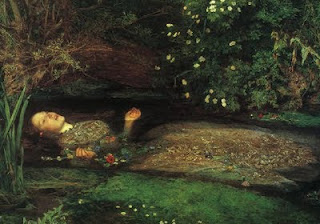 While the series has been condemned by some critics for being a type of "Carry On" film for its many sex scenes, and for what some see as the dumbing down of the Pre-Raphaelite Brotherhood, it certainly is lovely to look at.

Recently I was lucky enought to be given this fantastic book by a friend (thanks Leo): 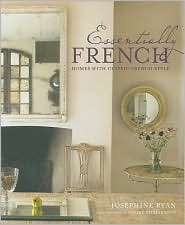 It's written by Josephine Ryan, a London antiques dealer: 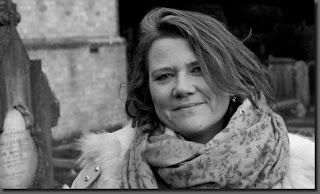 She has photographs of various homes in London and France, particularly in Languedoc, near Montpelier and Nimes, including her own home. Look at this beautiful blue bath from her website:

I've decided to use the book as a kind of guide book when I go to France later this year (hence my being on a budget at the moment). Languedoc definitely looks like the place to be.
Posted by beth at 2:19 PM 4 comments:

I haven't blogged for a while, due to that worst of all four-letter words: work. But, even though I'm now earning money, I'm on a budget because I'm saving for something. So, I still like to bag a bargain. A few weeks ago, I found this cute two-handled pot, which looks great on the top shelf in the boatshed: 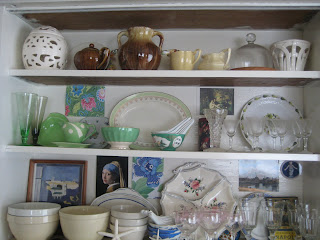 It was at the op shop, and was the first thing I'd found there for ages. Unfortunately, I think the word is spreading that vintage is good, so the op shop is no longer the treasure trove it used to be. Anyway, something about this vase caught my eye. Maybe the shape or the colours: 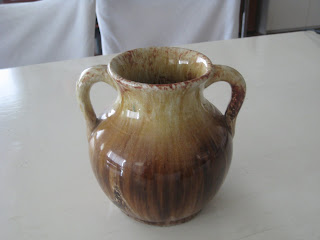 Then, when I turned it over, I saw the name "John Campbell" and the year 1934. I realised it was much older than I had first thought, so I bought it for $8. When I got home, I googled John Campbell and found out that it is a Tasmanian pottery and the pots are reasonably valuable: 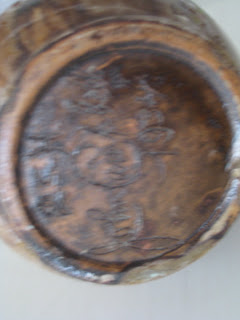 Then, last week, I saw this piece of furniture left on the street in Glebe. I grabbed it straight away, deciding it should look good painted white: 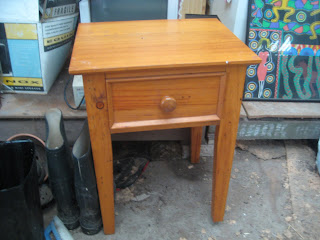 Then I went to one of my favourite stores, No Chintz and found the perfect handle for it: 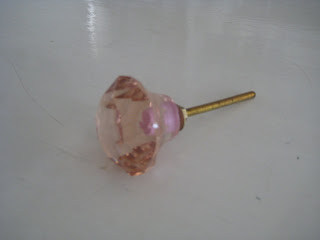 So watch this space for the finished product - as soon as I get a chance to paint it. While I was there, I grabbed a bundle of remnants for $4. I love these fabrics and will make some patchwork cushions: 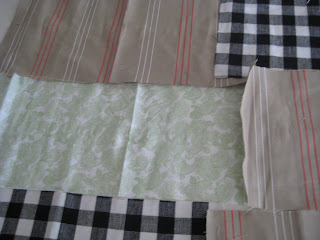