I haven't had time for blogging lately as I've been away for a little trip to Melbourne. The fibro beach shack reno is coming along, but still not there yet.
In the meantime, I'm posting some professional photos that we had taken of our house in Kiama on the NSW South Coast. It's called "Villa Mimosa" after a villa rented by Vanessa Bell (Virginia Woolf's sister) in Cassis on the Cote D'Azur in the 1920s. I know that Kiama is a long way from the French Riviera, but, hey, they're both by the beach.
Anyway, we've been doing the house up for a few years in my usual style, which I like to call "French Seaside Industrial". I've sewn cushions and repainted or re-covered existing furniture. For the main bedroom I painted some early 90s pine furniture, sewed the palm print cushion cover, bought some Ikea curtains and bed linen and found the lamps and mosquito net at the op shop: 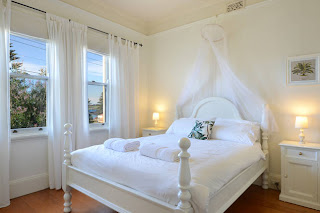 The second bedroom has an op shop mirror and chest of drawers, and a chair from Ruby Star Traders: 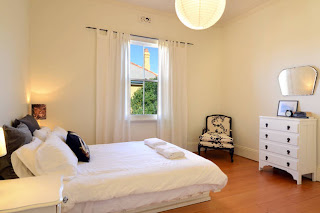 I've been dying to paint the timber kitchen cupboards white, but painting all the furniture kind of took it out of me so I'm leaving them for now. I bought a light shade and utensil racks from Ikea and an island bench with stainless steel top from Freedom: 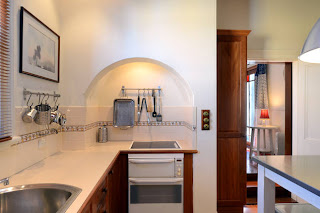 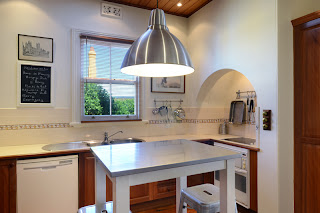 In the TV room, I put up a salon hang of vintage ship pictures. I painted the dresser and filled it with vintage plates. This is the dresser that nearly did me in and has deterred me from using white paint again for many years to come: 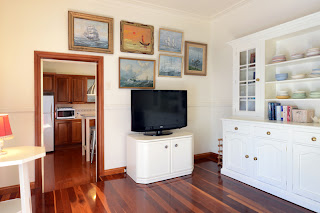 In the living room an old post office cabinet holds magazines. All the furniture is from op shops, with cushions from Pony Rider and Ruby Star Traders. The lovely old cedar fireplace surround is original to the 1890s house: 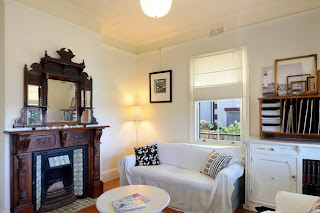 There is another fireplace in the dining room. I bought the two chairs either side of it from John Williams Auctions: 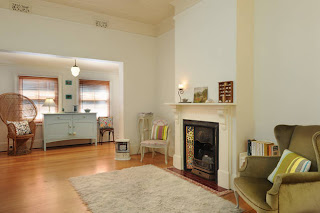 Here is the exterior of the house, which overlooks the surf beach at Kiama: 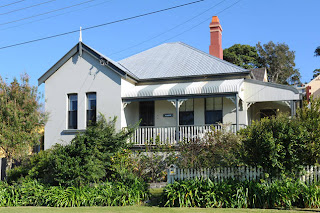 The side veranda is a great place to eat in summer: 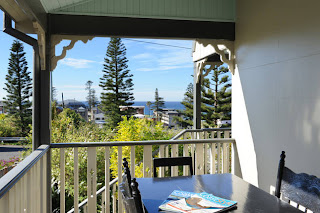 Mre images of Villa Mimosa are on the South Coast Holidays website at http://www.southcoastholidays.com.au/accommodation/kiama/villa-mimosa-kiama

Hi Beth, thanks for showing us your Kiama house. I was very interested to see all that painted up pine furniture and how beautifully it comes up. I have a pine sideboard that I've hated since delivery as it's orange :( but want to paint it. What type of paint did you use..gloss, matt..?? Did you underpaint..or use 2 coats of topcoat? I would love some advice on this. Thanks.

what a great house! i love your renovations. you sure have been busy!
x

Gosh your blog is yummy! I found boatshedchic about a year ago when I stumbled across a 'grandma chic' post you did and was enthralled with your lovely boat shed and restoration/diy projects. Glad to see you back, I was worried! :)

Glad you stopped in to say hi! Gosh the pics are beautiful.

Wow, Beth what a lovely job youv'e done. All your hard work has paid off,everything looks so fresh and welcoming.You need a spray-paint gun!