Finally, I can unveil the finished pics of the house we've been renovating all winter. It's a two bedroom fibro which was built about 50 years ago. We call it George's after the man who built it. We wanted a palette of white, black and neutral, so it seemed natural to start with the outside of the house: 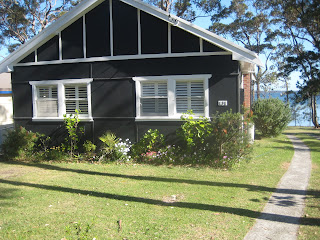 We have been renovating on a budget so almost everything was stuff we already had or Ikea purchases. I had updated the old dresser and shelf a while ago with white paint. The light fitting is from Ikea. I originally planned to paper the walls with Catherine Martin Lace wallpaper. But I realised that a large part would be covered by the dresser. I had some leftover Porter's chalkboard paint so I just used that: 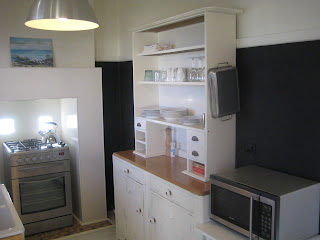 Even though we were using relatively inexpensive items, I wanted one high-impact element per room. For the kitchen, it was the butler's sink. Although it was bought at Ikea, I think it adds a touch of class. I wanted a slightly industrial look, so went for stainless steel appliances and the hanging racks for Ikea: 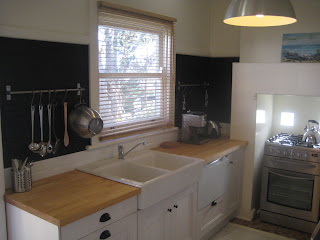 The house is quite small and the living room opens straight from the kitchen, so I needed the same look to carry through all the spaces to unify it. The living/dining has the same colour scheme and the white painted floor makes it look larger. The luxury item in this room is the chandelier I bought from John Williams Auctions. We already had the table and cabinet which we refinished. The bentwood chairs were $5 at the op shop. The art deco mirror was also from the op shop: 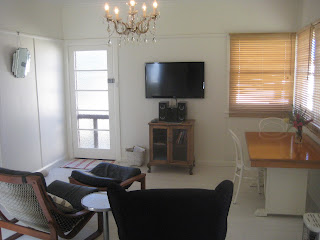 The side table, chair and footstool are also op shop finds. I had the chair re-covered in a Warwick fabric and covered the footstool myself in hessian. The cushions are from Freedom and Pony Rider: 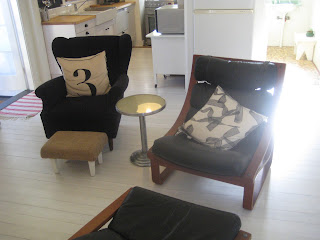 We wanted to keep the vintage bathroom, and jazz it up with light accessories to brighten it. The stool and art deco mirrors are from op shops and the shower curtain is from Urban Outfitters: 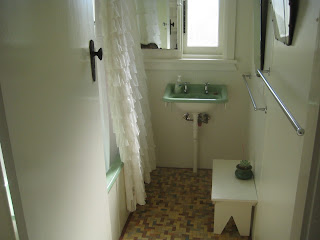 The bedroom has a bed, bedlinen and bedside lamp from Ikea: 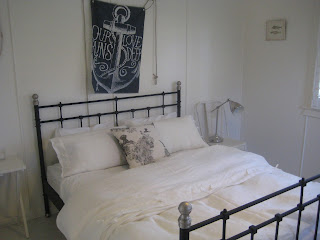 I also put in a settee that I'd bought years ago from Ruby Star Traders. The cuhions are from there as well. The wardrobe was original to the house but I think it has been improved by paint. The white plantation shutters were a splurge item: 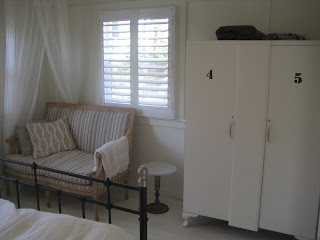 All in all, we are very happy with the results and consider it three months well spent. George's is at http://www.stayz.com.au/114423
Posted by beth at 5:00 PM

it looks like a lovely and inviting place to stay!
well done!
x

l'm so pleased to see the bungalow finished..it looks so smart with it's dark exterior and white trims and l really like the way this has been carried throughout the house. Everything is so light and bright and the dark accents add interest. The white floors are beautiful as is the shower curtain and the bedroom shutters. A high class finish on a tiny budget.. It's amazing!!

Wonderful renovation Beth, you've done some wonderful makeovers on your holiday homes.They are so warm and inviting,still can't believe you found those Thonet chairs for $5 each!

You've done yourselves proud at George's! I'd be delighted to live there. Adding a quality item per room is genius, it really lifts the standard.

She is beautiful Beth. I just love black and white. The front of the house has such fabulous street appeal
Carolyn